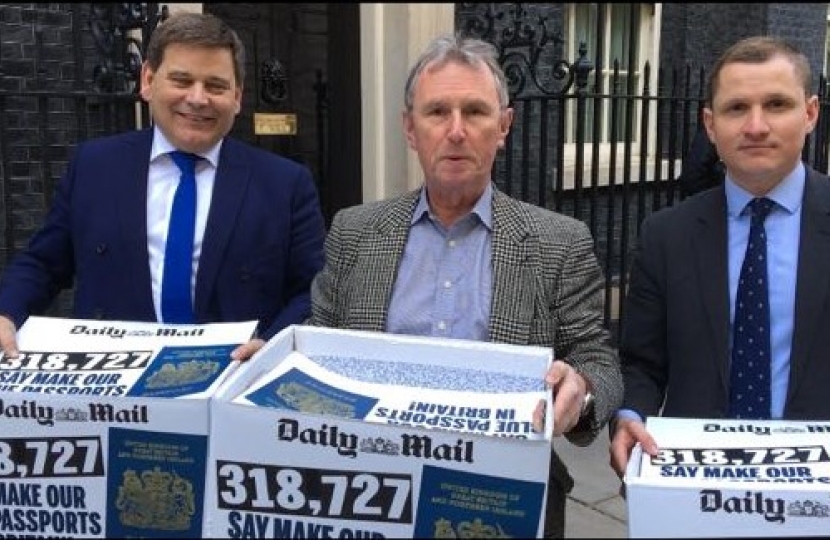 Nigel Evans, MP for the Ribble Valley, has today handed a petition to Downing Street requesting that newly-commissioned blue passports are manufactured in Britain. The petition, launched by the Daily Mail, reached a staggering 318,727 signatures from readers who backed De La Rue’s bid to create the iconic passports in the UK.

It has recently come to light that Gemalto, the French-Dutch company who won the original bid, have been accused of failing to notify the Estonian government of a flaw that made its electronic ID cards vulnerable to cloning and identity theft. This comes just weeks after the Passport Office, which is part of the Home Office, granted the contract to the overseas bidder.

“This is not simply about cost-efficiencies, this is about national security. The fact that French or Dutch companies can bid for, and win, contracts to manufacture UK passports yet UK companies cannot bid for their contracts because of security measures is absolutely absurd. Do we think less of our security than France?”

Due to this week’s revelations, the Home Office has agreed to extend the standstill period, the time between a contract being awarded and signed, by a fortnight. De La Rue have confirmed that it will be initiating appeal proceedings, which could lead to a judicial review, over the provisional decision by the Passport Office to award the contract to Gemalto.

“The decision to award this contract should not be based solely on cost. Passports are the most important official documents that most British citizens will own, and therefore it is imperative that the security and quality of the documents is taken into account. I hope the Home Office will fully investigate the allegations of security breaches in Estonian ID cards, and Gemalto’s failure to disclose this.”

Current EU-themed burgundy passports, in use since 1988, will revert to their original blue and gold colour from October 2019. However, people are expected to keep their current passports until they expire.

A final decision on the contract will now be made on Tuesday 17 April.