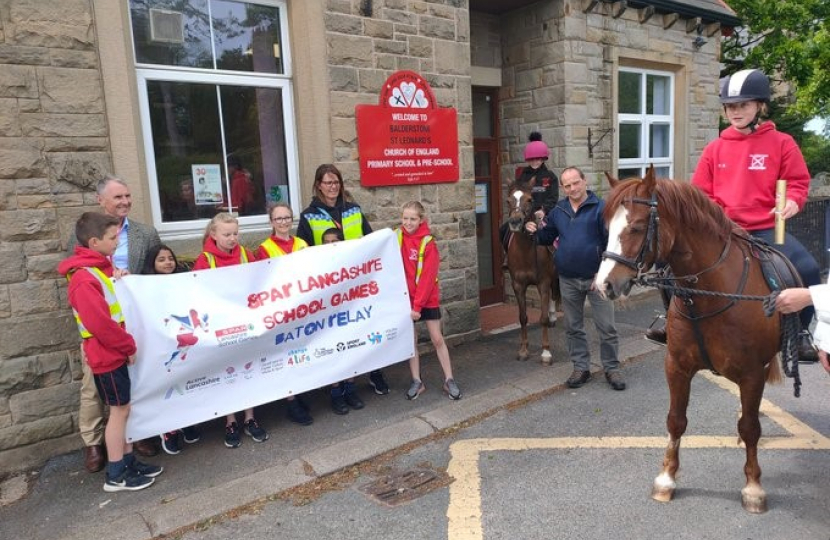 On Friday 13th May 2022, Nigel visited a local Ribble Valley school to see the arrival of the Schools Commonwealth Baton Relay, organised by Hyndburn and Ribble Valley Sports Partnership.  Having begun in West Lancashire in March, the metallic golden baton has been traveling around the Red Rose County’s 12 districts, visiting a total of 57 schools.

Each school has to find a creative way to get the baton from one school to the next. The baton was brought to Balderstone primary school by Mellor primary school. Balderstone then had the responsibility to transport the Baton to Salesbury. The school chose to have two of their children leading the parade on their ponies to Salesbury (as pictured above), who were greeted by the school band.

The Lancashire School Games 2022 provides children and young people with the opportunities to have fun, develop skills, and achieve personal bests through games, activities, and competitions in a calendar of events across the academic year.

The aim of the 2022 Games is to help young people recover from the effects of pandemic, and support those who may have been impacted the most. It will culminate in a celebration event in Blackpool’s Stanley Park on Tuesday 5th July 2022.

“I was delighted to see the baton delivered to Balderstone Primary. All the youngsters were incredibly enthusiastic and were keen to get involved.

“The Schools Commonwealth Baton Relay 2022 represents an opportunity for children across the Ribble Valley to not only recover from a difficult two years through sport, but to learn about the Commonwealth and the vital role it plays for us, on the Queens Platinum Jubilee year.”

Nigel was also pleased to learn that students at St Leonards Balderstone Primary School had been awarded the Artsmark Golf Award for their “Royal Woodland Woderland”. Artsmark is an award that aims to support the health and wellbeing of pupils with arts, culture and creativity.

Rt Hon Nigel Evans MP joined M&S colleagues with inspiring back stories from across the UK, representatives from The Prince’s Trust, Secretary of State for Work and Pensions Therese Coffey and even Percy Pig for a reception in the House of Parliament in Westminster to celebrate 10,000 young p