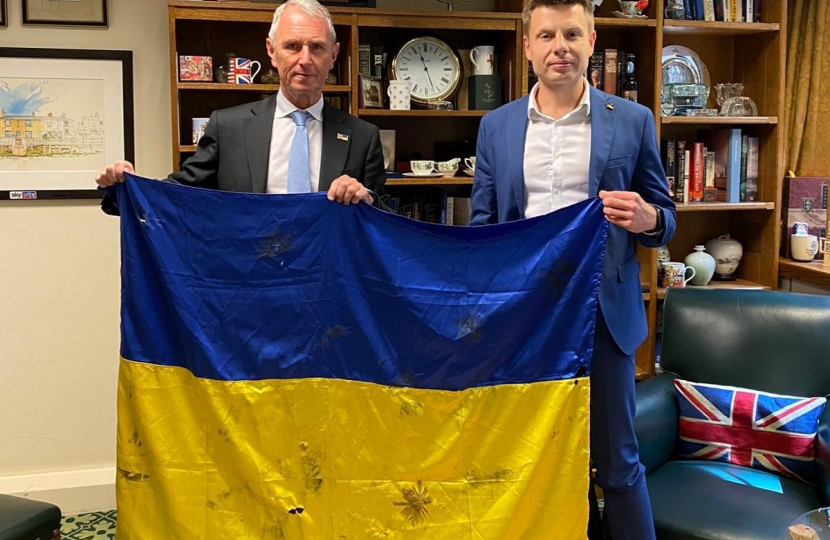 Pictured - Nigel Evans and Oleksiy Goncharenko along with a Ukrainian flag which has travelled along the frontlines of the war.

Member of Parliament for the Ribble Valley and Deputy Speaker, Nigel Evans welcomed Ukrainian MP, Oleksiy Goncharenko to the House of Commons yesterday to discuss the ongoing war in Ukraine and what the UK can do to help.

Having been a Member of the Ukrainian Parliament since 2014, Oleksiy has been a strong critique of Putin’s regime in the past and is currently travelling around the UK, appearing on shows such as BBC Breakfast, gathering support for the continued Ukrainian resistance to the Russian invasion, particularly around his home in Odessa.

Oleksiy spoke candidly of the continued troubles that are facing the Ukrainian people and thanked Britain for leading the way in support for Ukraine. He also stressed the need for Western Countries to start planning now how funds will be raised for the rebuilding of Ukraine following the war. A suggestion is that this money should be coming from the instigators of the conflict.

Significantly, the meeting provided an opportunity for Oleksiy to brief the Deputy Speaker on the ongoing situation on the ground and to stress the specifics of the military support Ukraine needs to win the war.

Nigel said of the meeting:

“It is so important that we continue to have these bilateral discussions with Ukraine and Ukrainian Parliamentarians on a one-to-one level in order that the stories of the war and its effect on the people of Ukraine can be fully understood.

“I am heartened by the strength and courage that ordinary Ukrainians have displayed throughout this conflict, and I very much thank Mr Oleksiy for taking the time to convey to me these harrowing stories from the front line.

“I am proud that Britain has been able to lead the way in offering support to Ukraine, not only providing vital weaponry and training to front line soldiers, but also putting into place considerable sanctions against the Russian regime and its oligarchs.

"I know here in the Ribble Valley a huge number of residents have been kind enough to open their homes to refugees and I am confident that the people of the UK stand firmly behind Ukraine and will continue to do so until they achieve victory and beyond.”

To date the United Kingdom has trained over 22,000 members of the Ukrainian army through Operation ORBITAL since 2015 as well as committing £1.5bn of military and humanitarian aid, with a further £1.3bn announced last week.

The MOD is also due to send additional counter-battery radars, heavy lift drones, and thousands of night vision devices. This is in addition to the significant quantities of non-lethal aid which have been sent, including more than 90,000 ration packs, over 64,000 items of medical equipment, more than 3,000 pieces of body armour, nearly 77,000 helmets, 3,000 pairs of boots and many other small items, including communications equipment and ear defence.

Rt Hon Nigel Evans MP joined M&S colleagues with inspiring back stories from across the UK, representatives from The Prince’s Trust, Secretary of State for Work and Pensions Therese Coffey and even Percy Pig for a reception in the House of Parliament in Westminster to celebrate 10,000 young p