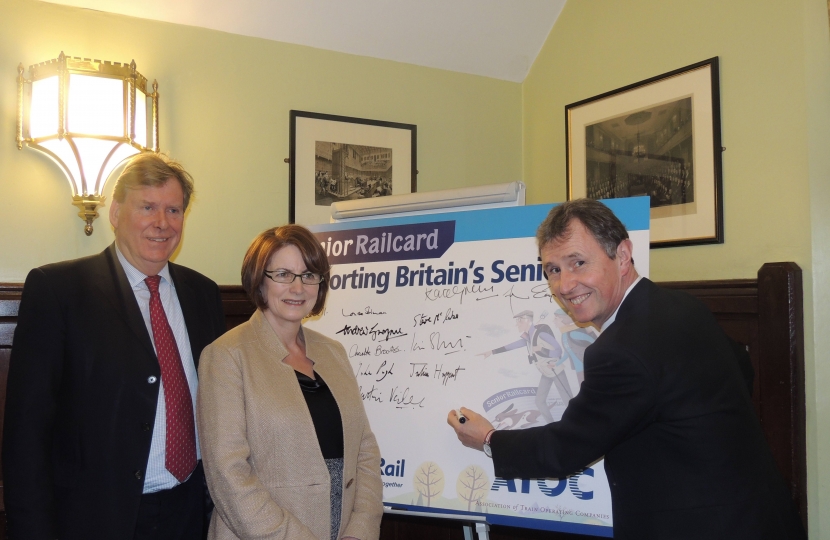 Nigel Evans, Member of Parliament for the Ribble Valley and Deputy Speaker of the House of Commons, on Wednesday (20 March) joined the Association of Train Operating Companies (ATOC), Age UK and older people’s campaigner Baroness Joan Bakewell at an event to celebrate the success of Senior Railcards.

More people than ever aged 60 or over own the Railcard which was launched in 1975 and offers an third off the cost of most standard and first class train tickets on the National Rail network.

New research by ATOC shows that over the last six years:

Around one third of the Railcard holders say they use it to visit friends and relatives and one out of 10 for a day out.

“I know that many people in Ribble Valley value their Senior Railcard. That’s why I was delighted to show my support for the Railcard and congratulate ATOC and train companies on their record breaking year.”

“As a Senior Railcard holder, I know it can make all the difference to encourage the over 60s to get out and about to visit friends, family and attractions across the country.  With over 25 million journeys made using the Railcard last year, I’m clearly not alone -  it’s great to be one of the million Senior Railcard holders who are making the most of the great deals on train fares it offers.”

“I was delighted Nigel was able to join us to celebrate the success of Senior Railcards. Train companies are committed to responding to passengers’ needs and will continue to work closely with Nigel and older people’s campaign groups to make rail travel even more accessible for the over 60s.”