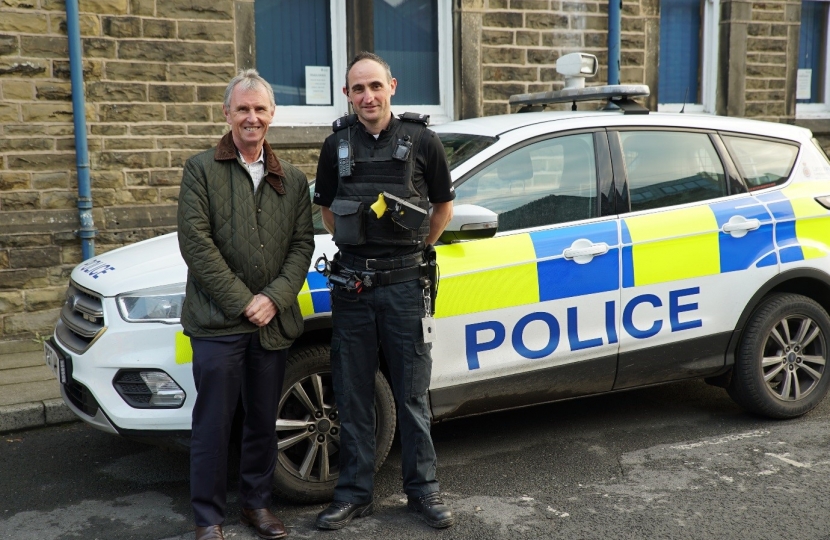 Nigel Evans, MP for the Ribble Valley, spent the day with police in Clitheroe last week to discuss the recent spike in crime in the area.

In recent months there has been a noticeable increase in crime across the Ribble Valley, ranging from anti-social behaviour to burglary. One of the most high-profile crimes in recent times was the theft of an ATM from the Spar shop on Edisford Road, it took the police just 4 minutes to arrive at the scene after initially being contacted.

There is currently one Inspector, 2 dedicated Sergeants, 15 permanent Officers and 8 PCSO’s in the Ribble Valley, with others resources available from surrounding areas joining for major crimes. Officers who are deployed in the Ribble Valley from other areas have a high-knowledge of the area, generally having lived or been deployed there previously. Further response resources are tasked to the area to support the response model, for example, road policing units and armed response officers are regularly tasked across the Ribble Valley.

Under current legislation, local forces can apply for funding if their area has seen a significant increase in crime, earlier this year, this method was used in Longridge after a public meeting attended by Mr Evans - an additional three officers are now based in the town as a result. Feedback from local residents has generally been positive, and anti-social behaviour complaints have significantly decreased.

During his visit Mr Evans was also informed of an additional 50 control room communications operatives at Hutton who have been employed to bolster calls to the 101 non-emergency number, which should reduce delays for those reporting smaller crimes. Additionally, a review of control room efficiency has led to the introduction of a ‘pod’ system, whereby operatives in the centre will cover specific areas of the county. This additional knowledge of the area by the call handler will ensure there is better understanding between the caller and the police to improve response times.

“It has been incredibly valuable to spend the day with the police to better understand the issues they are facing and the changing nature of crime. Lancashire police do a tremendous job of keeping us all safe, and for that we are all appreciative.”

It has been extremely useful to discuss with frontline officers the stresses that they are under and the challenges they face going forward. Mental health was a recurring theme during these discussions. Officers explained that there had been a significant increase in mental health detention for vulnerable adults, but with many facilities lacking spare beds, the police have been forced to spend up to 48 hours with the individual in hospitals. Shockingly, on a typical weekend around 12-15 of Lancashire’s officers will be with patients in hospital.”

"I have agreed to work with the police to push for a government commitment that the additional £2 billion pledged towards mental health funding in October’s Budget will be used to ensure there are sufficient resources available locally to care for vulnerable adults. I will also continue to push the government to reimburse Lancashire Constabulary for the full amount that has been lost for policing the fracking protests at Preston New Road – this totals around £6 million, which will go a long way in addressing issues elsewhere in the County.”

I appreciate that there is still a long way to go, but I will continue to have constructive dialogue with Lancashire Police and listen to their concerns.”