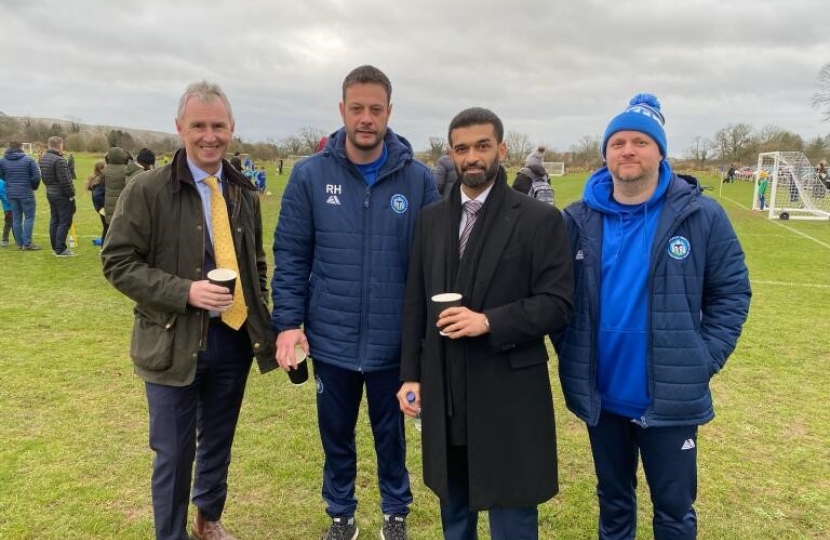 Nigel Evans MP welcomed to Clitheroe Wolves Football Club this weekend, The Secretary General of the Supreme Committee for Delivery and Legacy, His Excellency Hassan Al Thawadi, who was leading a delegation of officials on a visit to experience grass roots football in the North-West.

Nigel and The Speaker of The House of Commons, invited Hassan up to the North West to witness what grass roots football can do for the local community. Hassan and his colleagues arrived on Saturday morning at Mytton Fold Hotel in Langho where they were greeted by the owner, Colin Mustoe. Nigel and the Speaker met with the delegation and discussed the enthusiasm of many Lancashire Footballers and praised the commitment of the parents and volunteers.

Hassan met with parents at the Club along with the Chairman, Ross Hibbert, and David Crook, the Secretary and chatted to the young players. Hassan was thrilled to see the enthusiasm of the players and volunteers who are so essential in keeping the club running.

Clitheroe Wolves Football Club was originally started in 1992, but has seen huge growth in recent years, now fielding 65 teams, made up of over one thousand players. The Club has become so successful that it is unfortunately now largely full. Though aspirations are to expand and provide even more opportunities to young players.

“If it weren’t for the dedication of local volunteers and the enthusiasm of youngsters and parents then Clitheroe Wolves would not be able to be nearly as successful as they are with over one thousand players signed up.

“It is thanks to grass roots level football such as at Clitheroe Wolves that we can grow the next generation of footballers feeding into the highest levels of the game. Some players at Clitheroe Wolves are already making their way to the top, with one player Leighton Clarkson now signed up with Liverpool”

"To host Nigel and his guests for the visit to High Moor was a great honour.  As a club we are very proud of what we have achieved and hope to continue to grow the club.  We currently have over 1000 members (with 65 teams), and to have the opportunity to show someone of Hassan's status our club, is a great privilege and we hope he and his fellow visitors enjoyed it."

"It was a great opportunity to show Nigel's guests the great work that is done by all involved in the Clitheroe Wolves family - our facilities, teams, people - and the future plans required, for a town that is constantly growing.  Hassan was a very friendly man, who engaged with us all to find out more about us and the club.  He also had a long chat with my son, discussing and sharing their football experiences, which was really nice to see."

You can find out more about the club at: https://clitheroewolvesfc.co.uk/