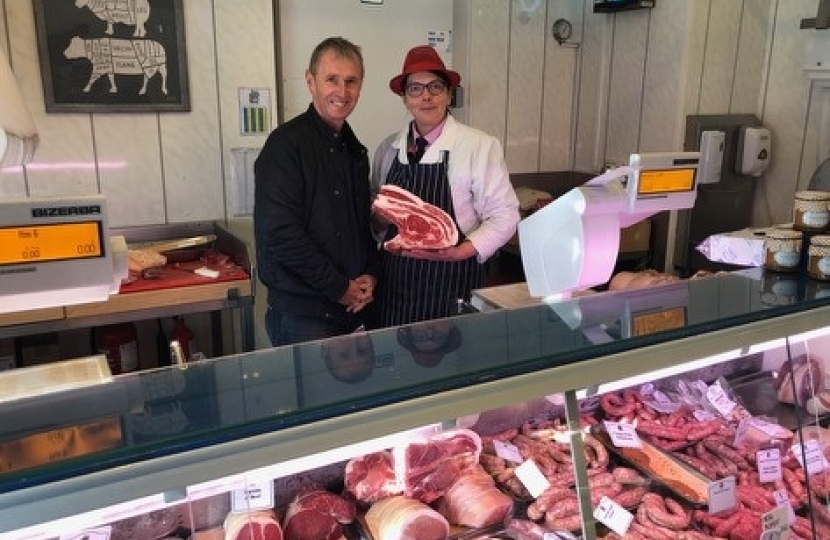 Nigel Evans MP has welcomed news that Roy Porter Butchers, based in Chatburn, has been shortlisted to win an award in the Countryside Alliance Awards, also known as the ‘Rural Oscars’.

The business is one of four competing in the North West butcher category, facing off against competitors in Windermere, Manchester and Stockport. The awards are the Countryside Alliance’s annual celebration of British food and farming, enterprise and heritage through small hard-working businesses.

The current owner of the business is Anne Ingham, who has worked in the shop for over 30 years, and took over from Roy Porter when he retired in 2016.

“I’m absolutely delighted that Roy Porter Butchers has been nominated for this award. It is testament to the hard work which Anne has put in to develop the business since taking over. The butcher is an anchor in the local community, and it is fantastic to see it thriving and doing so well.”

Speaking about the business, Anne said:

“We’re very passionate about knowing where all our meat comes from, and ensuring that we only use the highest meat, which we source from farms across the Ribble Valley and Lancashire. Almost everything is produced on site, we cure and smoke our own bacon, produce our own sausages, burgers, pate, ready meals and homemade pies. The only products we buy in are black pudding from Bury and Yorkshire, and fresh haggis from Scotland.”

The pork pies produced by the shop were once described by radio host Chris Evans as ‘one of the best he’d ever tasted’. The shop produces thousands of pies every week, and supplies local businesses such as Holmes Mill.

The Countryside Alliance Awards are now in their 14th year, and this year received more than 17,000 nominations. Anne is now preparing the shop for the regional judging in March, with the winners of the regional finals set to be announced in May.