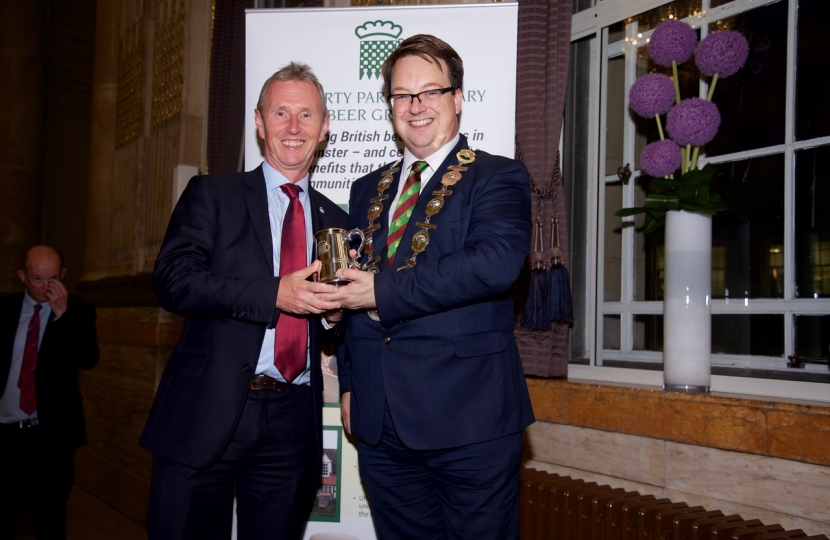 Nigel Evans, MP for the Ribble Valley, has received a special award, in recognition of his support for the Long Live the Local campaign and helping to secure consecutive freezes in beer duty. Nigel Evans was presented with the ‘Beer Champion’ award.

The special award is an initiative from the British Beer & Pub Association (BBPA) and Beer APPG to recognise the role of Mr Evans MP and other MPs from across the House, in supporting Britain’s beer and pubs since the 2017 General Election. The award especially recognises support for successive freezes in beer duty which secured thousands of jobs and millions of pounds worth of investment in the brewing and pubs sector.

Brewing and pubs are vital to the local economy in every part of the country. The Long Live the Local campaign is campaigning for a cut in beer duty in this year’s Budget and so far over 90,000 people have supported the petition this year, including 215 in the Ribble Valley constituency alone, in which 10% of the UK’s top 50 gastropubs reside.

“In rural areas the hospitality sector bears particular importance to the local economy, in the Ribble Valley alone nearly 2,000 jobs are provided by the 100 pubs, who along with local breweries contribute £212 million in tax directly and indirectly.”

“It’s a real privilege to receive this award in acknowledgement of the strides that have been taken to protect the brewing and pubs sector, which are an important part of British culture and identity. These freezes are wonderful for communities up and down the country – they allow smaller pubs to stay open and encourage people to socialize and reinforce that truly British value of togetherness.”

“This award recognises Nigel Evans MP for their invaluable support for the Great British pub and Britain’s historic brewing industry. I want to thank Nigel for the work done in securing two beer duty freezes in this parliament, and for their support for the brewing and pubs sector since the 2017 election.”