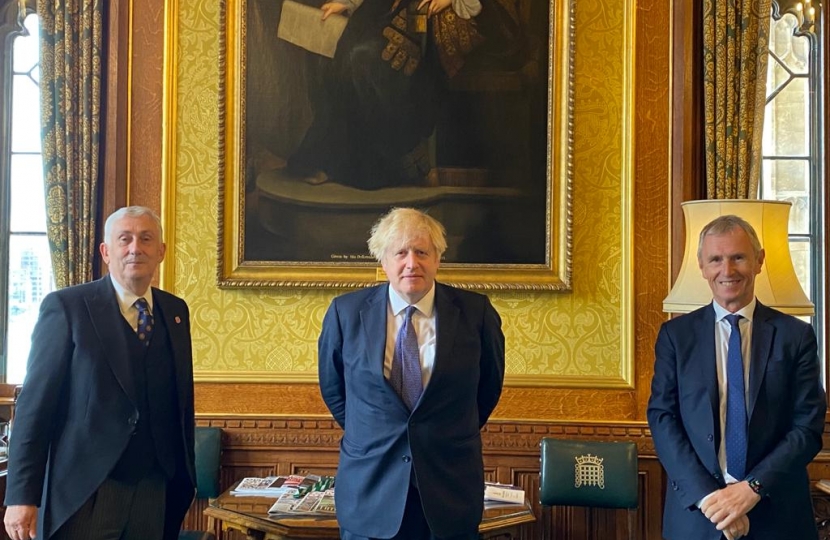 MP for the Ribble Valley, The Rt Hon Nigel Evans, has lobbied the Prime Minister over the future site of the National Cyber Force (NCF), in a last push before a decision on where it will be located is made soon.

On Tuesday the 16th March 2021, the Government’s Integrated Review of Security, Defence, Development and Foreign Policy was published, having been billed as the most radical reassessment of the UK’s place in the world since the end of the Cold War.

As part of the review, the Prime Minister announced that the new National Cyber Force would be located in a ‘Cyber Corridor’ in the North West, and is set to create and sustain thousands of jobs in defence and intelligence across the region.

Nigel met the Prime Minister along with The Speaker of the House of Commons, The Rt Hon Lindsay Hoyle MP, who is the MP for Chorley in Lancashire, which along with the rest of Lancashire would benefit hugely if the decision is made to base the NCF in Samlesbury near Preston.

Having previously lobbied both the Foreign Secretary and Defence Secretary, Nigel is clear in his view that Lancashire should be selected over Manchester as the site for the NCF:

“Samlesbury is easily accessible from both Central and East Lancashire, and with good transport links, a highly educated and skilled workforce, it’s clear that locating the Cyber Force in the area would help to create highly skilled jobs, and would push forward the ‘levelling-up’ agenda.

“While I appreciate the need to consider a range of sites when making a large investment, Manchester has attracted significant public and private investment over the last few decades, which has transformed the city. Locating the NCF in Lancashire would be a once in a generation chance to bring thousands of new jobs to the area, helping to level up Lancashire and to ensure that the benefits of levelling up are felt by all, not just those who live in our large cities.”