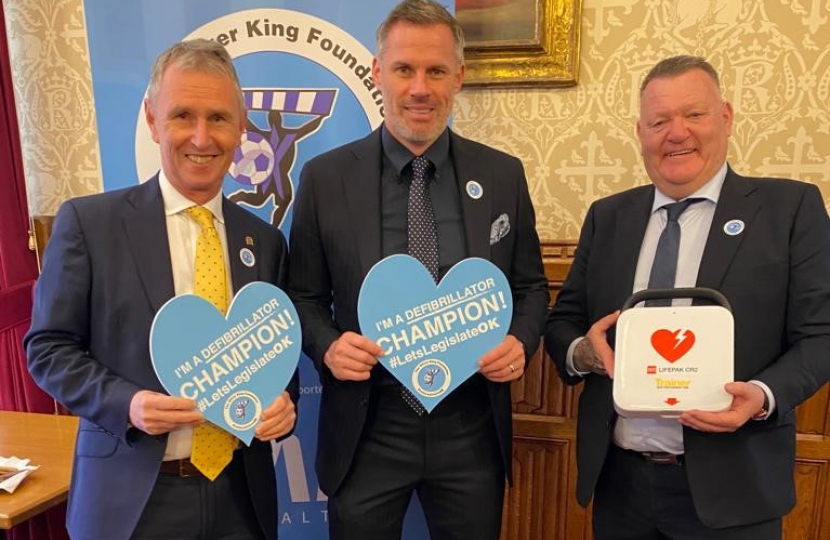 Nigel Evans MP met with Mark King and Jamie Carragher (pictured) in Westminster yesterday to show his support for the brilliant work which is undertaken by The Oliver King Foundation.

The Oliver King Foundation was set up by Mark following the tragic death of his son Oliver in 2011. Oliver died of a rare hidden heart condition which struck when he was going about his daily school routine. Oliver was an otherwise completely fit and healthy boy with a whole raft of sporting achievements. However, this hidden condition can affect even the healthiest of young people - every week in the UK around 12 people under the age of 35 die from Sudden Arrhythmic Death Syndrome.

After Oliver went into cardiac arrest it took over 20 minutes for an ambulance to arrive. With every minute which passed by his chances of survival diminished. In instances of cardiac arrest like this, being able to respond incredibly quickly is vital. If Oliver’s school had had access to a lifesaving defibrillator, he may well have been able to survive.

The Oliver King Foundation, which was set up by Oliver’s father Mark, in memory of Oliver, now works tirelessly to ensure that every school in the UK can have access to a lifesaving defibrillator. The Foundation has delivered thousands of defibrillators to various locations across the UK and has trained over 135,000 people in how to use the devices. This has already resulted in over 60 lives saved so far.

The former Liverpool star Jamie Carragher and his 23 Foundation have now joined forces with the Oliver King Foundation to install these lifesaving defibrillators at amateur football grounds and other locations across the North-West.

“I am honoured to be able to support this fantastic organisation which is not only delivering thousands of these lifesaving devices but educating the public on their importance and how to use them.”

I am so pleased that Mark has been able to achieve so much in memory of his son, Oliver. These achievements will have undoubtedly saved countless lives already and will I’m sure go on to save many more”

You can find out more information about The Oliver King Foundation and the work they do at: https://theoliverkingfoundation.co.uk/