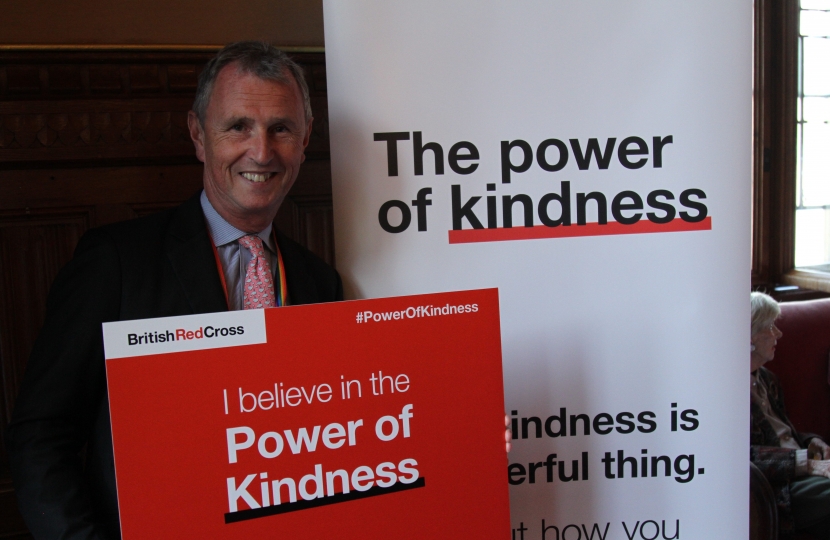 Yesterday Nigel Evans MP attended a Parliamentary reception organised by the charity at the House of Commons to meet with volunteers and staff and hear about their experiences of being deployed to incidents such as the Grenfell Tower fire, and the London Bridge and Manchester Arena terror attacks.

Volunteers from across British Red Cross services; from those getting patients in and out of hospitals to those supporting refugees and others combatting the impact of loneliness in their communities attended the reception. Volunteers spoke about their reasons for giving up their time to support the British Red Cross and the evening saw MPs pledging to follow their lead by doing their own act of kindness.

The reception came after the British Red Cross experienced one of its busiest years since WWII, assisting 9,265 people in more than 1,500 emergencies across the UK in 2017. A total of 1589 volunteers from the North West gave up their time for the organisation this year.

Speaking at the reception, Nigel Evans said: “The British Red Cross has been a crucial institution for our nation since 1870, it continues to provide a flawless service to thousands of Brits every year and I am proud of the work of the British Red Cross in assisting those most in need. As the landscape of the UK has changed the Red Cross has adapted, they now offer support for contemporary issues like modern day slavery - which is on the increase. We are extremely lucky to have this service at our hour of need, and long may it continue.”

Simon Lewis, head of crisis response at the British Red Cross, said: “Last year we saw an unprecedented number of UK emergencies and we simply would not have been able to respond without the support of our staff and volunteers.

“We want to put people and their communities at the heart of emergency response, to help communities rebuild and recover faster and it is heartening to see so many MPs supporting our cause.

“We know everyone has a role to play when disaster strikes, even the smallest act of kindness can make a huge difference.”

Tracey Crouch MP, Minister for Sport and Civil Society and James Brokenshire MP, Secretary of State for Housing, Communities and Local Government both made addresses in which they praised the response of British Red Cross staff and volunteers to the summer of emergencies last year and the power of the acts of kindness they showed.

Tracey Crouch, the Minister for Sport and Civil Society, said: "I would like to pay tribute to the invaluable work of the volunteers and staff of the British Red Cross in responding to emergencies and supporting our communities. Their dedication and resilience was even more clear in their response to the unprecedented domestic emergencies of last year."