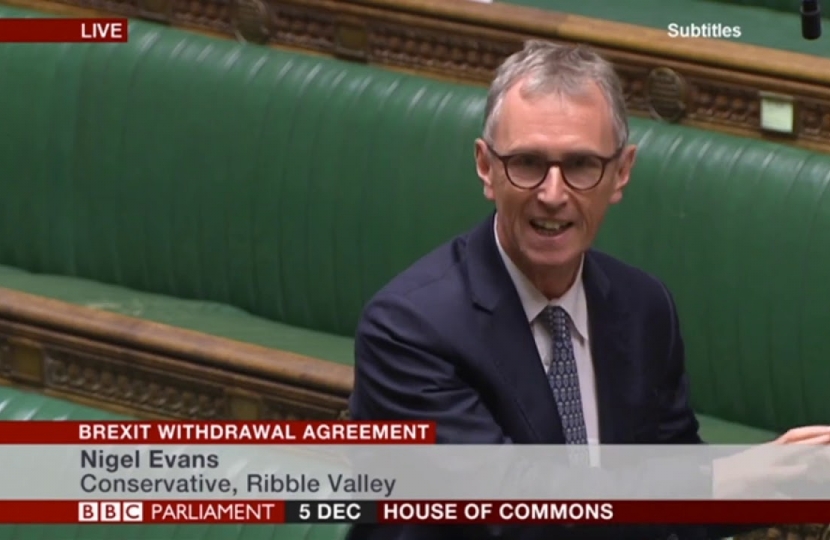 Nigel Evans, MP for the Ribble Valley, has criticised Lancashire’s Labour MPs who voted against the second reading of the Prime Minister’s Withdrawal Agreement Bill (WAB) in the House of Commons yesterday evening.

By failing to vote in favour of the government’s bill passing the second reading, Labour MPs voted to refuse the bill and stop it from entering its next stage – the stage where MPs can table amendments to address the concerns they have. Kate Hollern, Gordon Marsden, Julie Cooper, Graham Jones, Cat Smith and Mark Hendrick all voted to stop the bill in its tracks, while Rosie Cooper voted to take the Withdrawal Agreement to the committee stage for amendments by members.

“This is such arrogance and betraying of the vote in Lancashire in 2016. The MPs who voted down the Second Reading of the bill last night want to stop Brexit at all costs - I must give credit to Rosie Cooper for listening to her constituents and helping the bill to reach the next stage.

“Should we get an opportunity later next week to push the bill forward I have no doubt these same Labour MPs will then amend it so thoroughly that it will be no resemblance to the key areas of why we voted to leave. No to a Customs Union or Single Market; no to justifiability by EU courts; yes to control of our own immigration; yes to doing our own trade deals; yes to making all our own new laws.

“This bill must be enacted, or Labour must let the voters put this rotten remain parliament out of its misery with an early general election. A second referendum is another betrayal of the promise we gave to the people during the referendum and the last election by the Labour Party – and is a method that protects MPs jobs against a clearly angry public.”