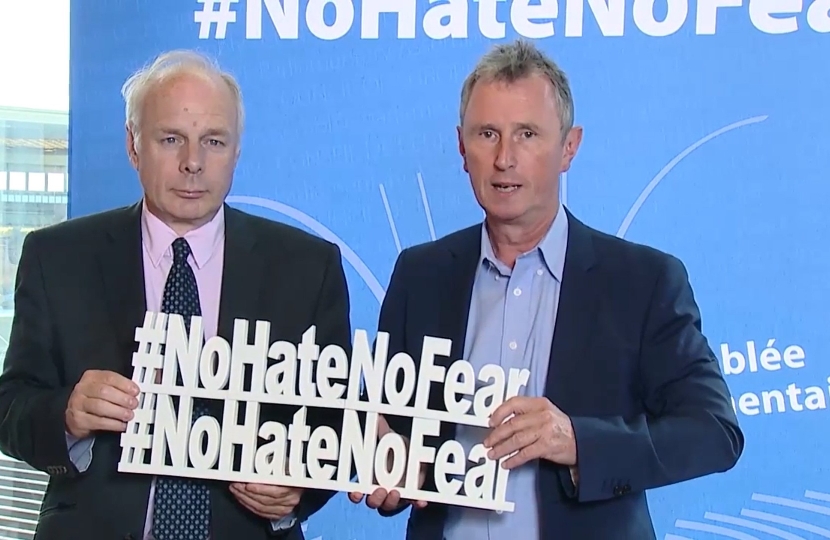 Conservative Ribble Valley MP Nigel Evans recently attended the Council of Europe summit in Strasbourg, where he was a part of launching the ‘No Hate No Fear’ initiative. The purpose of the initiative is to encourage all players in society to stand firm against the threat of terrorism by refusing to give in to hatred or fear.

Talking about the recent murder of Jo Cox, Evans said “What happened to Jo Cox was an absolutely appalling tragedy”.

Speaking with Nigel was Conservative MP Ian Liddle-Granger, who said “One of our colleagues Jo Cox died at the hands of an extremist… We don’t want to live in fear or hate”, with him going on to say “United we stand, divided we very much fall. Let’s stick together”.

The Parliamentary Assembly of the Council of Europe President said “Through this initiative, we call on politicians to shoulder our responsibility to speak out publicly against fear and hatred, and to promote fundamental freedoms and the values of tolerance, non-discrimination and respect for human dignity. Through practical action in our parliaments and in our constituencies, we can help immunise society against fear and hatred”.

Nigel went on to talk about his own experiences,

"As an openly gay member of the British parliament, whenever I look on TV or social media what is happening to gays throughout certain parts of the world, it is absolutely appalling.

“Hundreds of thousands of gays are living in fear, because of the terrorism that is perpetrated by whole sections of their society”.

Evans called upon politicians and public figures to join the campaign, in order to help spread the message that wherever you are, hatred will not be tolerated.

“We’ve got to bring an end to this as quickly as possible, why should they have to live in fear of the terrorism that exists in their societies”.

Evans finished on a rather poignant point, saying that “Love conquers all”.