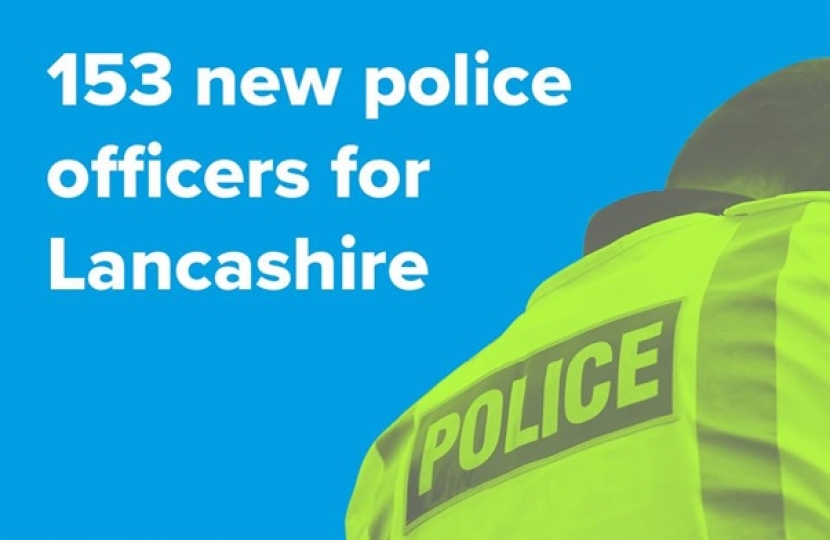 Nigel Evans, MP for the Ribble Valley has voiced his satisfaction at today’s announcement by the Home Secretary that Lancashire will receive 153 new Police Officers in the next 12 months. The news comes as the Home Office released police recruitment forces from all 43 forces in England and Wales.

Lancashire’s 153 officers will make the force the 9th largest beneficiary of new recruits, whilst London’s Met Police receives the largest number of officers. The government is making £750 million available to support forces to recruit 6,000 officers by the end of 2020-21, with funds being provided in the Chancellor’s Spending Review earlier in the year.

“I’m delighted that Lancashire Police will be able to recruit 153 more police officers next year to help keep our streets safe.

“I spoke about the rise in knife at the start of the year after a teenager was stabbed in Clitheroe in my constituency, which is why we must send out a clear message that any form of crime will not be tolerated.

“This government under the Prime Minister Boris Johnson is determined to get tough on criminals, those who threaten the safety of our communities and recruiting more officers is the first step to ensure this happens.

“I urge the Police and Crime Commissioner to guarantee that the Ribble Valley gets its fair share of these officers.”

All officers recruited as part of the 20,000 uplift over three years will be additional to those hired to fill existing vacancies. They are also on top of the extra officers already being recruited because of the £1 billion increase in police funding for 2019-20, which includes money from council tax and for serious violence.

The Rt Hon Nigel Evans, MP for the Ribble Valley, has welcomed the Health Secretaries confirmation that the vast majority of remaining restrictions will be lifted on the 19th July.