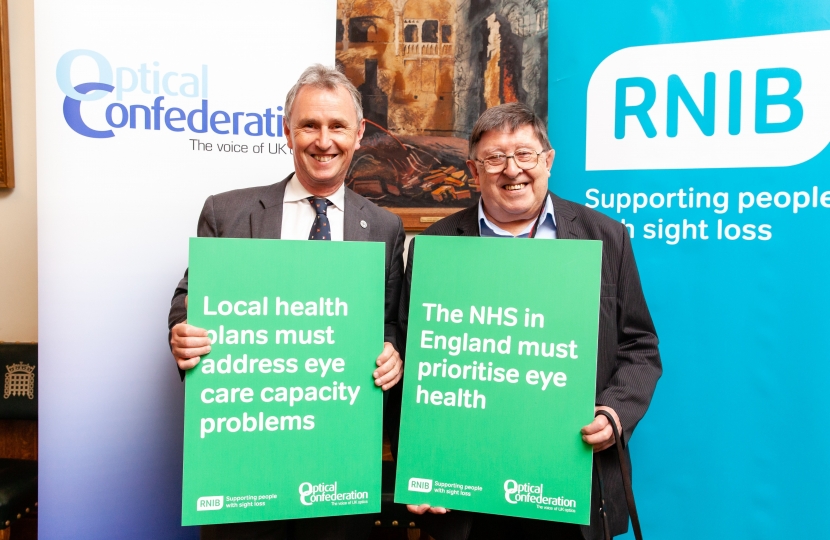 Mr Evans attended the parliamentary reception of the All-Party Parliamentary Group (APPG) on Eye Health and Visual Impairment this week and met with The Royal National Institute of Blind People (RNIB), including Clitheroe resident and RNIB fundraiser, Michael Tupper.

The reception launched the APPG’s report following its inquiry into capacity issues in eye care. It found the current eye health system is failing patients on a grand scale but can be fixed if the NHS prioritises eye health and action is taken immediately.

The inquiry and its calls for urgent action are supported by key organisations including RNIB, the Optical Confederation, and the Royal College of Ophthalmologists. The inquiry received evidence from 557 patients and 112 organisations. There were almost 7.6 million ophthalmology appointments in 2016/17 in England, a figure which has increased by more than 10 per cent over the past four years.

Just over half of patients told the inquiry they had experienced at least one appointment or treatment being delayed. Seventy-seven per cent of patients felt this caused them anxiety or stress, and 54 per cent felt it had a negative impact on their day-to-day life. Patients also expressed concerns about long waiting times, problems securing appointments, a lack of continuity in their care, and poor communication from the clinic.

“I am fully supportive of the calls from RNIB to make eye health a priority in the NHS. Listening to my Michael Tupper speak was very moving, and I am thankful that his condition is now under control. The rescheduling, delaying and cancelation of appointments due to a lack of capacity for eye care can lead to disastrous results for those with conditions such as glaucoma.”

“I will talk to the Sustainability and Transformation Partnership to ensure the eye health needs of my constituents are taken into consideration and properly assessed.”

“Nobody should lose sight from a treatable condition simply because their eye clinic is too busy to provide care in a clinically appropriate timescale.

“Implementing the recommendations in this report will help to meet the increasing demands for eye care services, deliver strategic and joined up eye care, and reduce the numbers of patients losing their because of delays.”