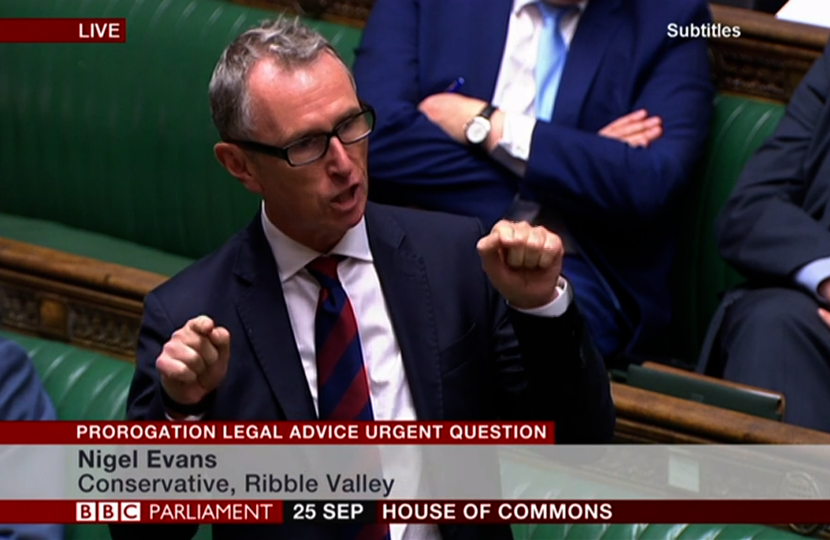 Nigel Evans, MP for the Ribble Valley has expressed his anger at the number of Labour MPs from Lancashire who he says are trying to delay and stop Brexit by any means necessary.

All 14 districts in Lancashire voted to leave the European Union, with Mr Evans’ own constituency of the Ribble Valley voting to leave by 56.4% to 43.6% remain.

MPs recently voted in favour of the ‘Benn Act’, which requires the Prime Minister to seek an extension to Article 50 should a deal not be agreed by Parliament by the 19th October.

“I am deeply sad that Labour MPs in Lancashire have now made clear that they refuse to support a sensible deal, and that they only seek to delay Brexit in any way that they can. These MPs were only too quick to vote for the Surrender Act, which ties the hands of the PM in the negotiations to secure a deal. It is well known that decisions by the EU go down to the last few available days, and by requiring a deal by the 19th October, MPs have removed any incentive for the EU to offer concessions.

“It is an absolute democratic scandal that they are now trying to force either a second referendum or a ‘Brexit in name only’ on the people of the UK. It is the responsibility of MPs to enact the wishes of their constituents, and you can’t get more clear cut than every district having voted to Leave.”

“The voters I speak to in the constituency are taking a keen interest in the tricks being played by MPs in Parliament. We have a country that backed Leave, but a Parliament that backed remain, and it is clear that many MPs simply do not represent the will of their constituents. I am certain that when the next election happens, people in Lancashire will make clear their discontent over the games that we have seen played in Parliament recently."