Nigel Evans: “Boris is the right man for the job” 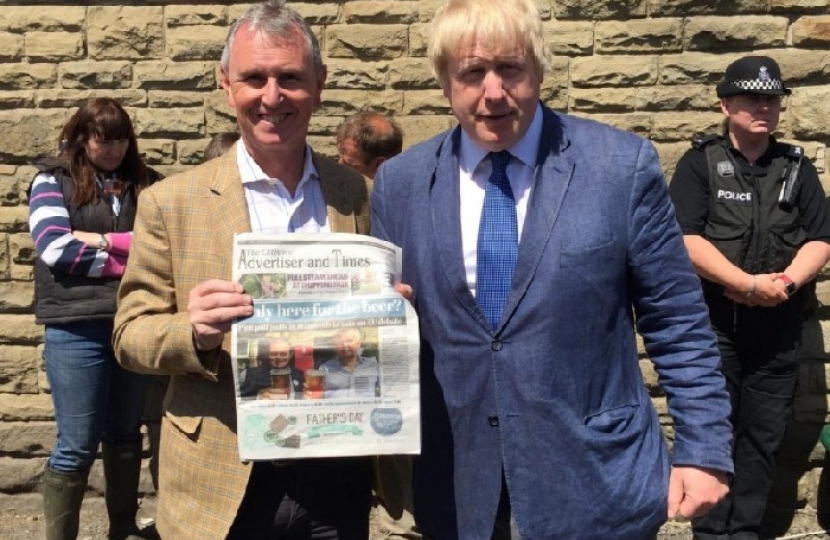 Nigel Evans, MP for the Ribble Valley, has claimed that Boris Johnson is the “right man for the job” after he was elected as Leader of the Conservative Party.  Today’s victory means that Boris becomes the successor to Theresa May as the Prime Minister and will formally take over tomorrow afternoon.

Boris stood on a campaign that pledged to ensure the UK leaves the EU on the 31st October and switch government priority to allow the domestic agenda to flourish, including funding for 20,000 additional police officers, increasing frontline spending in the NHS and raising funding for schools.

Commenting on the appointment of Boris Johnson as the new Leader of the Conservative Party, Nigel Evans said:

“I am delighted that Boris has been endorsed by two-thirds of Conservative members, this shows that his optimism and ‘can do’ attitude is exactly what the membership believes we need to lead the UK out of the current stalemate. Over the past 6 weeks a majority of Ribble Valley members that I have spoken to have voted to make Boris our next Prime Minister – this is a clear mandate to achieve Brexit by 31st October.

“Leaving the EU in October is essential if we are to push our domestic agenda forward, which means enhancing our public services and increasing funding in education and the NHS. Importantly, this also means recruiting more frontline police officers. Boris has promised 20,000 extra police officers in the UK, I will push to ensure that Lancashire and the Ribble Valley receive their fair share of these officers.

“I trust in Boris to keep our agriculture sector thriving in the event of a non-comprehensive deal with the EU whilst fostering positive partnerships with the Commonwealth and particularly the USA; who BAE Systems have worked closely with during the development of the Joint Strike Fighter – the rear section of which is manufactured in Salmesbury. It is very clear to me that Boris is the right man for the job!”