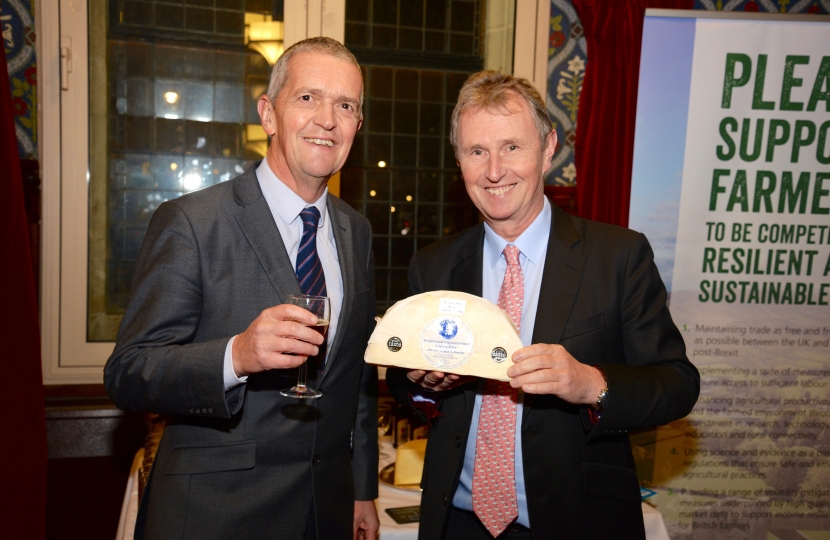 Nigel Evans MP has recognised the vital role that Ribble Valley arable and dairy farmers are contributing to the local and national economy, after attending an event in Westminster this week.

Farming in the North West contributes £684 million to the local economy and provides 33,163 jobs – this is on top of the safe, affordable food farmers produce and British countryside they maintain.

The beer and cheese tasting event at The House of Commons was held by the All-Party Parliamentary Group for Beer and the National Farmers’ Union (NFU) to highlight the importance of two of our great national products – beer and cheese.

The UK produces over 700 cheeses – that’s more than in France. The total value of cheese sold in the UK in 2016 was £2.75 billion with cheese consumed in 95% of households. Meanwhile, 10,000 different beers are produced using British malting barley and hops with the beer and pub industries generating £13 billion in tax revenue every year.

Speaking from Westminster, Mr Evans said: “Beer and cheese represent two of the biggest, and most iconic, British food groups and it was fantastic to meet some of those farmers who produce these great products.

“There are many worthy reasons to support British arable and dairy farmers: they are responsible for securing our fantastic British food supply, looking after our world-renowned countryside and sustaining a dynamic local rural economy.

“It is critical that as politicians we continue to back British farming and create the right regulatory environment to ensure arable and dairy farmers continue to provide the safe and affordable food that the public trusts.”