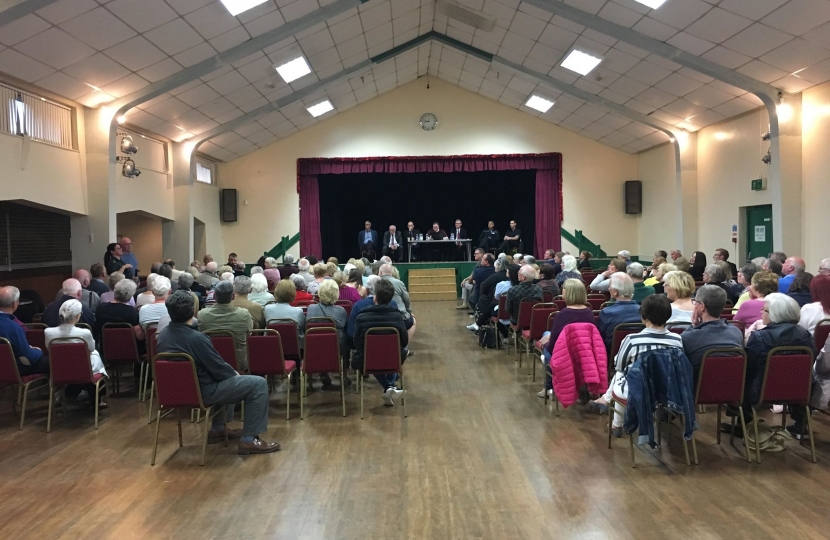 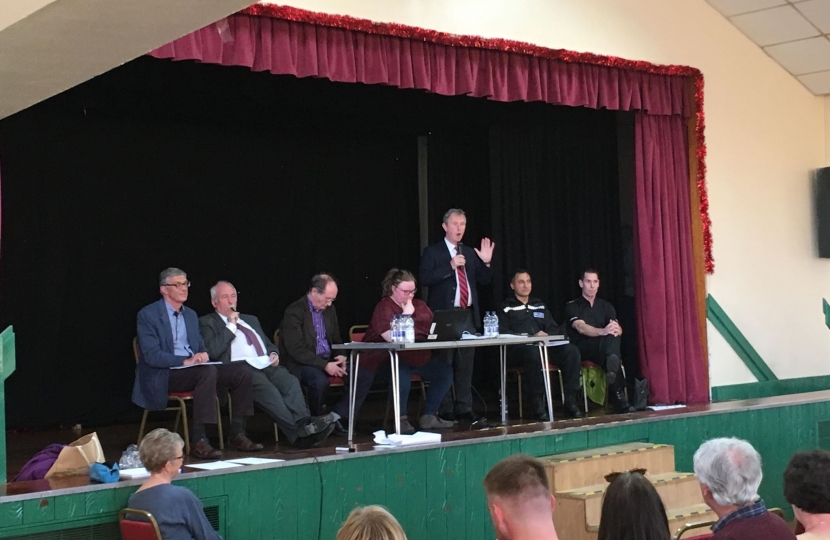 A public meeting was held in Longridge last Friday to discuss Policing, Crime and Anti-Social Behaviour.

Nigel Evans, the MP for the Ribble Valley, spoke on the panel about some of the issues which constituents have brought before him. He talked about the anxiety and fear that many local elderly residents feel because of the recent unrest and the intimidation that has been caused by some young people in the area. Mr Evans also commented on some of the mindless vandalism and the damage caused to the local bowling green which he described as “totally unacceptable” explaining that he did not see these as minor misdemeanours but something more serious.

The strength of the meeting was also aided by representatives of the local police, Chief Inspector Jameel Murtza and Local Inspector Andy Winter. Both Jameel and Andy spoke about how the Policing model for Longridge had been reanalysed and how they had lobbied hard for an increased police presence in Longridge. Inspector Winter confirmed that they had been successful and that three extra officers were being brought in starting this week who will be based permanently in Longridge. The Inspectors then went into detail about what local Police has been doing to crack down on problems in Longridge. Andy Winter explained that they had already taken action against nine youths in relation to offences and also described upcoming plans for Police to go to Longridge establishments with Police dogs to clamp down on drug and alcohol troubles in the area.

Cllr Steve Ashcroft from the Longridge Town Council also spoke on the panel detailing what the Town Council have been doing to combat the issue, such as setting up the local youth gym on Friday nights and reinstating the Youth Council in conjunction with the local schools. Mr Ashcroft also explained some of the problems they have faced such as the costs of repairing damage to the local public toilets which have been vandalised. Mr Ashcroft pointed out that the local residents also have a part to play in tackling the anti-social behaviour problem in the town. He expressed the view that, if residents volunteered their time, more activities could be set up to give young people more things to do and to spend their time on.

The panel was rounded off by Cllr Alan Schofield, who was there on behalf of Lancashire County Council. Mr Schofield talked about the concerns there are for community safety and reiterated that keeping the Youth Centre up and running is a step towards resolving the Anti-Social Behaviour issues. In answer to a question, Cllr Schofield touched upon the possibility of setting up a partnership between LCC and the local Police regarding Acceptable Behaviour Contracts in the same vein as Lincolnshire Police have done.

The local residents were given the opportunity by the chair to raise questions and express their thoughts on the subjects of crime and policing. These questions ranged from asking where those causing trouble are from, Longridge or Preston, to asking the Police what the residents can do to help them out through voluntary work.

The meeting was also a chance for some to get the message out about local groups which are there to help with the problem. For instance, representatives from the local Army Cadets explained that kids could join them at St Cecilia’s on Mondays and Thursdays 7-9pm. The Army Cadets are funded through the Ministry of Defence. Members do not have to pay and get perks such as foreign travel for free.

Kieran, from Longridge Community Arts, spoke about their work with local kids and wanted to get across the positive message that the vast majority of the young people in Longridge are brilliant and an asset to the community.

The meeting was also joined by some of those who had been at the youth gym that evening. This gave them a chance to put across their perspective. The main point which was brought up was that they are continually told that they aren’t allowed to hang around specific areas but there isn’t a place to go as an alternative. They feel that they are being moved along from every public spot in Longridge but there is nowhere else to go.

These representation from members of the public were a great opportunity for all parties to learn new information and for everyone to get an appreciation of the struggles that are faced, as well as possible solutions.

In all, most of those in attendance said that the meeting had been worthwhile and that they had learnt something from the gathering.