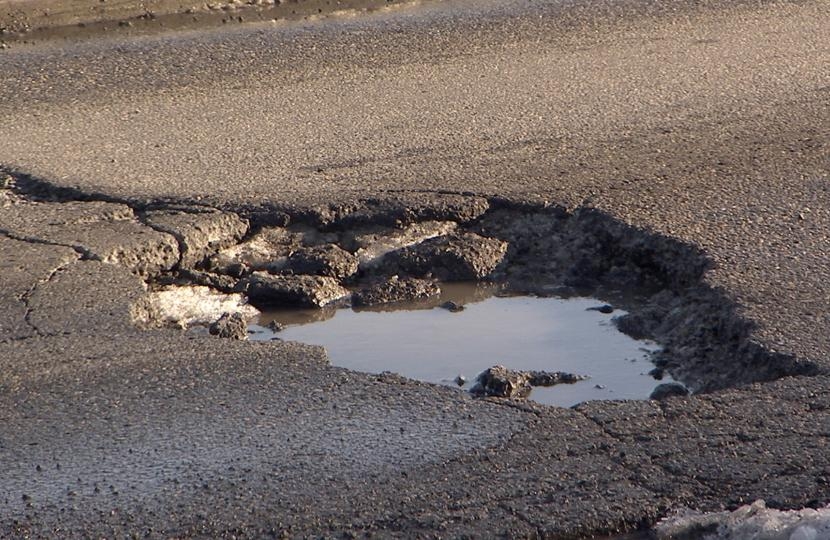 Nigel Evans, MP for the Ribble Valley, has called for urgent action on Lancashire’s potholes. Data provided by the ‘Fill that hole’ app suggests that are nearly 2829 unrepaired potholes in Lancashire which are driving motorists to despair. This figure represents hundreds more than any other Northern county, and makes Lancashire one of the worst counties in the UK in terms of pothole numbers. However, as these numbers are taken from road users who have registered a pothole this represents a small proportion of real figures, for which no data is available.

For many years Nigel has campaigned about the state of the roads in the Ribble Valley by writing to Ministers and Councillors, he has also raised the issue at business questions on several occasions.

Speaking about the current state of the roads, Mr Evans said:

“It is no secret that the roads in the Ribble Valley are a shambles, almost every weekend I battle around various parts of the constituency battling the maze of potholes. Not only are these a costly nuisance for motorists, they are a major hazard to the considerable number of cyclists in the area - it only takes one pothole to dismount a cyclist.”

Recently, Mr Evans tabled several parliamentary questions on the issue of potholes to the Department for Transport, asking what action has been taken by the Government to assist Local Authorities in repairing potholes.

Parliamentary Under Secretary of State for Transport, Jesse Norman responded:

“The Government, for the first time, has set up a dedicated fund for potholes. This is providing local highway authorities in England, outside London, £296 million between 2016 and 2021, including an extra £46 million announced in the 2017 autumn Budget.

This funding is in addition to just under £6 billion the Government is providing to local highway authorities for local highway maintenance in England, outside London.”

Mr Norman admitted that the department had made no formal estimate of the total value of compensation for cars damaged on the local road network.

Continuing, Nigel Evans addressed concerns about the effect the current weather will have on the already-deteriorating roads and the action he is taking:

“The ‘Beast from the East’ and Storm Emma will only cause further damage to our roads. After the extreme weather has ceased, I call on Lancashire County Council to conduct a survey of all Lancashire’s roads to prioritise the worst areas for repair. I understand that the Council may not have the appropriate resources available to do this, and so I have also called on the Minister for Local Government, Sajid Javid, to release more funds for Councils to address the chronic problem of potholes.”

It is recommended that people report any potholes on Lancashire County Council’s website http://www.lancashire.gov.uk/roads-parking-and-travel/fault-search you may also be eligible for compensation from the Council if your vehicle is damaged by a pothole.